IF YOU are looking to find the Loch Ness Monster or Niseag in Scottish Gaelic, then you need a luxurious pad to crash out in, and a smart guide to point you in the right direction.

Fortunately for me and my wife Anna, who was celebrating her 60th birthday, we found both. Nessie, a mythical monster, as she is affectionately known, lurks in waters found in the River Ness, in Inverness, a city of 47,000 people, in the heart of the Scottish Highlands. We were on her trail, and our daughter Roxy was going to join us a day later.

For those travelling from Kings Cross St Pancras, in London, it is eight hours on the LNER train, or 1 hour 40 minutes from London’s Heathrow Airport, flying British Airways. I opted for the scenic train ride and saw the Scottish countryside in its full glory. While enjoying, I ate my way through a Naked katsu curry rice pot for £2.75 and a coffee latte at £2.50, from LNER’s extensive food and drink menu. I could have also indulged in sweets and a whole bunch of savouries, but I decided to be good. LNER have a QR code on the back of each seat which you can scan, order your food, which is then brought to your seat. Unfortunately on the day it was not working, or maybe my computer skills were not up to scratch. I just did old school and stood in a line with no queue. Perfect.

Four hours into my journey I knew I was entering Nicola Sturgeon’s backyard, when our English sounding driver was replaced by a Scottish one on the border at Berwick upon Tweed. For those that don’t know Nicola, she is Scotland’s first minister, leader of the Scottish Nationalist Party and is angling to be its first prime minister in an independent Scotland. I was asked for my ticket, but not my passport.

1,600 men were slain on the battlefield at Culloden

If you want to dig deeper into Scotland’s history, then you should go to a place, just outside Inverness, where the Scots and the English had their last big fight, known as the Battle of Culloden in 1746. This was the last on our tour, and it proved quite emotional. 1,600 men were slain in that battle in less than an hour, 1,500 of them Jacobites.

The pad mentioned earlier was none other than the five-star Ness Walk Hotel, at 12 Ness Walk, nesswalk.com on the leafy banks of the River Ness. Originally a 19th century house, the restored Grade B listed building still retains many of its period features. But unified with modern design and architecture, it provides an amazing balance between the past and present.

Place of wellNess with even greater things to come

Sometimes it pays to spend a bit extra for those finer things in life, and the warm welcome from Grace at Front Desk, was just the start of greater things to come. Once checked in with a glass of the finest bubbly, it was great to throw myself onto the huge super king size bed for a short nap before a shower and then dinner at the hotel restaurant known as the Torrish.

The shower was glorious, not to mention the huge bed 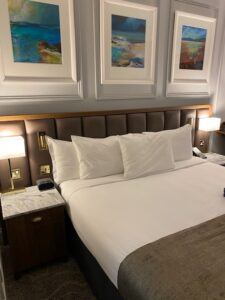 The shower was glorious- the type that just hits you from above – like the Scottish rain that we would experience later. But if you are having fun and singing in the rain there’s no reason to complain. How I loathe those showers that you have to swivel the head so that the water hits you in the right places, and the metallic hose gets tangled.

The place was super clean and tidy and the cleaners were in no rush to kick me out having had a bit of a lie in. I also have an allergy to feathers in my pillows and that was taken care of prior arrival.

No time for hanky panky

As well as the shower, there was a big bath that could have fitted two, if you fancied a bit of hanky panky. But on this occasion there was no time for that.

Dinner was served at 9pm, the train had arrived in Inverness at just after 8pm, and the duty manager Rhys Stewart wanted to introduce himself. The Torrish was already in full swing and the staff found us a nice quiet corner. This was fine dining at its best. It felt like the Scottish chef supremo Gordon Ramsey was working the kitchens, throwing out the expletives and getting a very well job done.

I took the plunge with a plate of Skye mussels 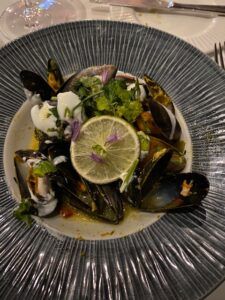 I hadn’t eaten mussels in over 30 years, but something inside of me kept telling me to take the plunge, so I ordered a Isle of Skye mussels starter and was not disappointed.

The bowl was rammed full of mussels which were immersed in a nice North Indian broth. The green chilli gave it a kick that a premier league footballer would have struggled to muster. Lime yoghurt and a hint of diced pepper added to the richness of the flavour.

For the main I decided to opt for more familiar territory and have a Pork Fillet Wrapped In A Pancetta. It has to be said the pork was f***g beautiful, something out of Masterchef, not Hell’s Kitchen.

The dish came with a roast onion purée, confit baby shallot, charred spring onion, black pudding croquette, and a whole grain mustard jus. The dish was a delight and the black pudding was something of an acquired taste. The piece de resistance of the evening was a delight – a Lemon and Raspberry Posset – as it says on the tin – surprisingly a cold dessert.

After such a wonderful dinner it was time for bed. Our tour guide Gavin Nicholson, the tall man in a kilt, as he describes himself, managing director of Invergordontours was coming to pick us up at 8.30am, before the Inverness rush hour. If you do sign up with Gavin, please mention 2-travel.org

He couldn’t promise to find us the Loch Ness Monster, but gave us a tip on what to do if we came face to face with Nessie. Gavin  spent some time with crocodiles abroad, and urged us to punch Nessie on the nose if she wasn’t too friendly.

Did he believe in the existence of Nessie? There were sightings in the past, though he couldn’t say either way, but he confirmed that stories of Nessie had a habit of appearing a few weeks prior to the holiday season.

Gavin was rearing to go. He was in his full battle gear, wearing his Nicholson kilt. We had booked him as part of a package with the hotel, but you can do it separately by just visiting his site. We went for the driver only option, which meant we had the pleasure of his own company in a bulky BMW, which was more than adequate for the terrain.

The first place Gavin drove us to what was a waterfall in Dhivach Falls, where Scottish playwright and author J. M. Barrie, had a lodge. It was where he was inspired to write Peter Pan, about a mischievous boy who could fly.

To get to the waterfall, Gavin took us into some woodland and we had to negotiate a steep path going down to the waterfall. I joked that we hadn’t taken any travel insurance, but I got down safely. I’ll have to remember to practice what I preach. Check out my blog on travel insurance – they do some really good deals. Looking up at the waterfall near the top we saw a house. It was where J.M. Barrie lived for a time.

Gavin is the business when it comes to travel

When you are stuck in a car with a guide, it’s great when you can see that the guy has an interest in his job, and is willing to engage in conversations and is a true guide, not just a chauffeur who does drop offs and pick ups. Apart from the Loch Ness Monster subject we covered all sorts of topics from football, travel, politics and the like. Gavin took us to Urquhart Castle where we watched a film and bought souvenirs, then to the stones of Clava Cairns, which are popular among fans of the book and TV series Outlander. It is about a nurse from 1945 who is mysteriously thrown back in time to 1743, where she finds herself in an unknown world.

But in between these touristy mini trips, Gavin introduced me to another aspect of his company He takes his visitors to various distilleries. Not being booked for that tour, was not a problem. He opened his boot when parked and introduced me to a Quaich, a two-handed Scottish vessel used to drink whisky and brandy. And so I got a wee dram of at least five types of Scottish whisky starting off with a single malt of Glen Moray.

Anyone for a cup of Afternoon Tea?

Part of our package was also an Afternoon Tea and with our daughter Roxy with us, it made it that much more special. We had a whole selection of teas. Black teas included Assam, Earl Grey, Darjeeling, and Decaf Ceylon Tea. I opted for soft honey brew of a green tea called China Gunpowder. Anna had a Rose Bands Tea, made from freshly dried rose buds, while Roxy opted for a Camomile Tea which had a hint of pineapple.

My favourite on the Savouries was an Estate Venison and Black Pudding Sausage Roll, Plain Scone with seasonal jam and clotted cream, and Classic Victoria Sponge among the cakes. With a chilled glass of Delamotte Champagne, it came to a reasonable £34.50 per person.

ALL the staff were incredible

The staff at the Ness Walk Hotel were incredible – one big happy family – too many to mention, but here’s a quick shout out to: Charlotte, front desk, nights; Mark Ford, concierge supervisor; and Paul, nights.

I told Rhys, the duty manager, that I would write a blog about his hotel and he kindly got catering to leave a sweet little something in our room. Among the sweets and fudge was a leaf made of marzipan with 2-travel engraved. Thanks Rhys and guys in catering. You are the best!

Although we didn’t see Nessie on this trip, we still had a fabulous time. If we had seen Nessie we probably would have scarpered back to London, not being Scot the Brave. The Scottish Tourist Board boasts that there have been 1,000 sightings of her over the years. According to them, her description is: long and thin, usually green and with black humps, tail and snake-like head. And she’s shy. Maybe next time. But if you do see Nessie, please leave a comment below.