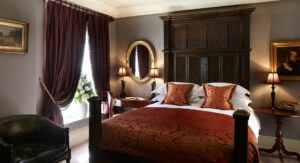 If you want to spend a night out in London and need to crash out in a posh boutique-style hotel, then The Rookery in Farringdon is a safe bet. This historic place dates back to 1764 and ticks nearly all my boxes.

Close to Underground Station and all the amenities

It was my daughter’s birthday and this hotel was ideal – just two minutes walk from Farringdon Underground Station and not too far from the famous Paternoster Chop House Restaurant where we were going to eat. 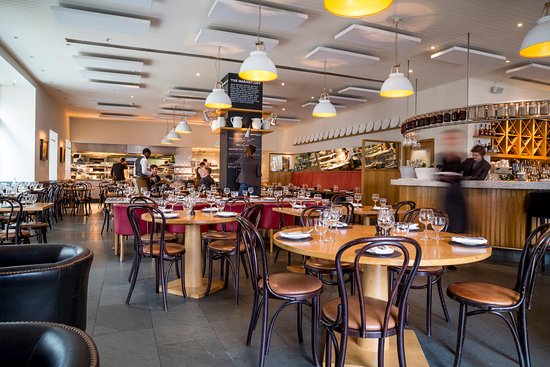 Before I rave on about The Rookery, let me tell you about The Paternoster, which is just next to the Old Bailey Courthouse, famous for putting mass murderers behind bars. The restaurant was the location for the popular First Dates Channel 4 TV series, where possible partners meet up for the first time.

It was a good evening by all accounts

Its original location was near St Paul’s but then it moved round the corner to Old Bailey Its attentive staff though still kept up the magic. especially our Bulgarian waiter Ivan, who made sure we had a good evening, or as they say in his home country “dobar vecher”. The evening kicked off with a few cocktails and mocktails. A couple of us opted for the Paternoster Club which included a Tanqueray London dry, citrus, strawberry, mint and  lemonade. The non-alcoholic cocktail was a Passion Leaf Highball, made up of Everleaf Forest, passion fruit, pineapple and lemonade.

Starters then followed which included Smoked Salmon, Roasted Cauliflower Soup, mains were Paternoster Steak And Mushroom Pie, Roasted Chicken Ballotine and Braised Cole Valley Lamb Shank. Desserts were Sticky Toffee Pudding and Sauternes poached pear in a blackcurrant sorbet, almonds and ginger crumble. Two of us shared a dessert and with house wine, minus coffees, the bill came to a tad over £300.

Ivan gave us a superb service

Ivan looked like the maitre d’ of the TV programme Fred, but without the beard and moustache. There were a few single girls in the restaurant but no guys showed up – so it must have been a strictly girls night out. 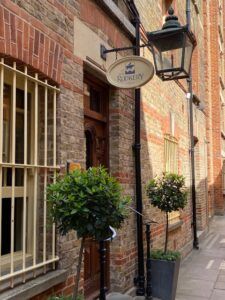 Cool location for The Rookery

Totally full we made our way to The Rookery on foot on what was a warm and pleasant evening. There were a few pubs on the way, a couple coffee shops had we needed to sober up, and some other shops though closed, that we found interesting and would explore the next day. Our daughter had celebrated a milestone of a birthday, and the evening was perfect.

From outside. The Rookery looked just like a private house. I believe the hotel was made up of a couple of old houses dating back to the 1700s and the interior reflected that big time. The staff were extremely welcoming and before we knew it we were sitting in our Club Double Bedroom.

Like being in a luxurious palace fit for modern-day royalty

On our way up the stairs we passed several large oil paintings and once we reached our room we placed our old fashioned key into the lock and what a sight when we opened the door. Our double bed was regal, all the furniture looked period and there was an old-fashioned wardrobe which doubled up as a mini bar.

Having had a full on day, I popped into the bathroom to have a look and within minutes was enjoying myself in the tub. It felt like going back in time. Not a shower, but a bath, and with old fashioned taps. Those on the nearby sink were in gold. The towels were fresh and clean. My only disappointment was there were no small bars of soap, but hand-wash. Was that to stop people from taking them home? 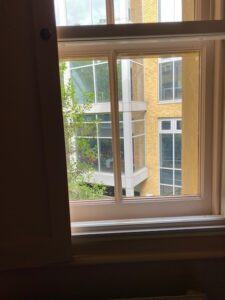 What was funny was that before I started to undress I noticed that the windows needed to be shut. They had wooden panels which I closed quite quickly, including some higher up, so I had to stretch. I looked to see if anyone was in those buildings, and was relieved to see that they were offices, and being a Friday night, they were empty. I wondered if any of the people working in those buildings had ever noticed anyone starkers.

Pulling the WC chain reminded me of my childhood

The old-fashioned toilet even had a chain to pull instead of the usual handle. It reminded me of the toilet in my parent’s house when I was growing up.

Had I not had that glass of wine when I’d got to bed, I may have needed some bedtime reading. By the bedside lamps there books that were more than 50 years old and would definitely have sent me to sleep: Teach Yourself Physics; War Memoirs of Lloyd George; and A Guidebook To The Bible.

I missed my net curtains, but such is life…

When I went to bed I pulled the drapes and switched off the lights to total darkness. It’s only a small thing, but if they had put in net curtains, it would have let in enough light to know when to wake up in the morning. Instead, I had to scramble to find my watch to see that even though it was pitch dark in the room, it was actually seven o’clock in the morning. In fact. it was a slight noise I could hear from the corridor that alerted me to the fact that some people were going downstairs for breakfast.

Could have had breakfast in bed if I’d wanted

The nice thing about the hotel was that you could order breakfast to your room, but as I was meeting someone early I decided to skip breakfast and have an early lunch.

In fairness, the reason I only indulged in the hotel for one night was that my daughter wanted to treat me, after I had paid for the restaurant meal. Despite cheaper hotels in the area, my daughter opted for something that went against the grain, an ‘oldie worldy’ hotel. That made it special and well worth the money for the great memories. I’ll never forget my daughter’s 30th birthday, the restaurant meal, and would strongly recommend the hotel.

I have also stayed in hotels run by the Kingsmills Hotels Group which I can recommend. This post contains affiliate links that I earn a small commission from at no cost to you. 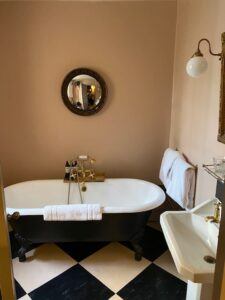